Local’s Guide to the Oasis of Vendicari Nature Reserve

A natural and archaeological jewel in South-east Sicily.

The Oasis of Vendicari is a 1500 hectare paradise that hugs 8km of coastline along the south-east tip of the island. Home to three of the best beaches in Sicily (and Italy), migrating Flamingoes and the ancient remains of the reserve’s past inhabitants, it’s a must visit throughout the year for nature lovers, history buffs and beach bums alike.

While today the Oasis of Vendicari may be a home exclusively for nature, it has a long history of human habitation dating back to the 5th century BC up until a few decades ago in the 1950s.

Hidden beneath the park are the remains of the 2500 year old greek city of Eloro, whose history is shrouded in mystery. As history unfolded Romans, Byzantines, Normans and Saracens also conquered the area leaving their own mark on this ancient landscape through the construction of a necropolis, forts and the tonnara.

After world war two the tuna industry in the area collapsed and the final inhabitants of what is now the reserve left. Then in 1984, after forty years of abandon and the unwavering dedication of local environmental groups, the 1500 hectares of parkland was made a regional reserve for the protection of its unique natural and historical heritage.

It is now home to some of the best beaches in Sicily and an ecosystem that lives undisturbed from development.

Best time to go for…

For wild, empty beaches, soft sand and warm clear water, head to one of the northern beaches (calamosche, eloro, marianelli) outside of peak season.

The Vendicari reserve is a key stopping off point for thousands of migratory birds. A trip to the ‘Pantano Grande’ is a must in late summer and early autumn to catch a glimpse of the resting flamingos and hundreds of other aquatic birds.

The Vendicari reserve is a key stopping off point for thousands of migratory birds. A trip to the ‘Pantano Grande’ is a must in late summer and early autumn to catch a glimpse of the resting flamingos and hundreds of other aquatic birds.

Four entrances line the edge of the vendicari reserve – Eloro to the North, Calamosche on the north-west, Vendicari in the Centre and Citadella to the south.

The entrance at Vendicari offers the quickest route to the beach and as such, most people tend to go there. If you are searching a more wild coastline, head north to Calamosche and Eloro.

If you are heading to the reserve you may want to pack lunch and plenty of cool water – it is often a long walk to the coast and there are few places to stock up.

The southern beach at San Lorenzo is well served with sun loungers and a kiosk but the northern beaches are wild as they come.

The Beaches of the Vendicari reserve

A few kilometres south of the tourist beaches of the ‘Lido di Noto’ is the most northerly of the beaches in the Vendicari reserve. Well served with a small bar, showers and a car park only a few hundred metres from the beachfront, it is easily accessible by car and then on foot.

Set amongst the remains of the 2500 year old greek city of Eloro, it’s a short walk to see the amphitheatre <link> and the ancient via Eloro leading down to the sea.

Five mins from SP19 then five mins on foot.

Half day trips for families wanting to see a little history.

Tucked between the rocky outcrops of Eloro to the North and Calamosche to the south, Marianelli beach is by far the wildest and most untouched of the reserve. Private and secluded the beach hosts a variety of visitors including a few naturists who having been coming to the beach for decades.

Reaching the beach isn’t easy but is worth it for the determined few. The warm waters and pristine sands are particularly special. To get to there, park the car at the north of the reserve before heading south along Eloro beach and then across the rocky outcrop. Take with you everything you need for the day, or stop at the bar at Eloro beach, as it is a long, hot walk back.

Beach goers wanting a secluded, wild beach for some peace.

Vendicari beach is a long bay stretching several kilometers south of the Tonnara of Vendicari with fine, white sand it offers stunning views across to vendicari island and the historical monuments to the north.

Along the shoreline, and for a few metres out, is frequently covered by an innocuous algae, don’t worry though, paddle out pass this and the water is pristine. Getting here is also simple, park in the central car park and take a short stroll round the Pantano before arriving.

Five mins from SP19 then 10-15mins on foot. Follow signs for Calamosche.

Tucked in a cove to the south of Marianelli, lies Calamosche beach – awarded the most beautiful beach in Italy in 2005, it is the most popular of the park’s wild beaches with its fine, reddish sand and a shallow sea bed that stretches out well beyond the cove.

Thanks to the two rocky outcrops that line the edge of the beach, the sea is calm and warm and a great place for snorkelling. To reach the beach, follow the signs for Calamosche from the SP19 until you reach agriturismo Calamosche . Here you can park your car and grab what drinks and snack you need before the 15 walk along the park trails to the beach.

Five mins from SP19 then 10-15mins on foot. Follow signs for Calamosche.

Probably the most frequented and best serviced beaches of the Vendicari reserve, San Lorenzo beach is as beautiful as those to north, with everything you need to soak up the sunshine in comfort.

Here the limpid shallow waters are the great for even the smallest of children, and the mix of sandy shorelines and clusters of rock pools make for a great playground for the kids to explore. The beach is also the easiest to reach, parking up at the south entrance of the park it is a short walk to the beachfront.

Five mins from SP19 then a short walk on foot.

Great for families looking for some modern comforts.

The Wildlife of the Vendicari reserve

Whether you are a nature lover, bird enthusiast or just appreciate a stroll, the park offers some spectacular year round wildlife sights.

The peak periods for wildlife are the spring and the autumn as migratory birds head back and forth from Africa. Of the feathered migrants perhaps the most charismatic are the Flamingoes, who arrive in the Autumn after their long flight south from central europe. Each year the number of arrival grows, as the park provides a vital stopping off point for thousands of these birds to rest before crossing the mediterranean and sahara desert.

Another wildlife success for the park has been the return of the Loggerhead seaturtle, which after 20 years of absence has returned to breed on the beaches here. Female turtles have been arriving to deposit their eggs since May 2013 with fifty or so hatchlings making out to the open sea each year. 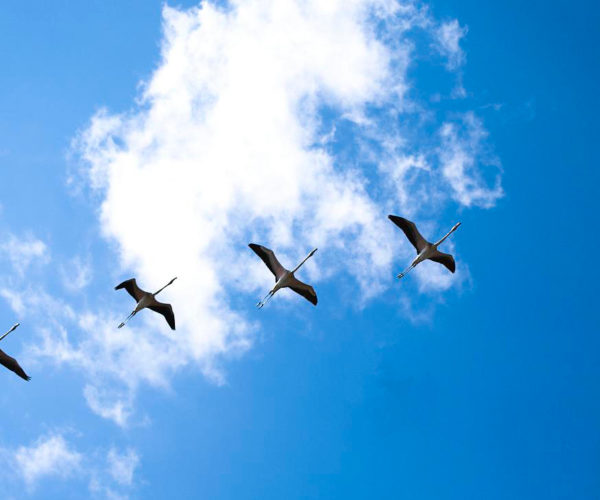 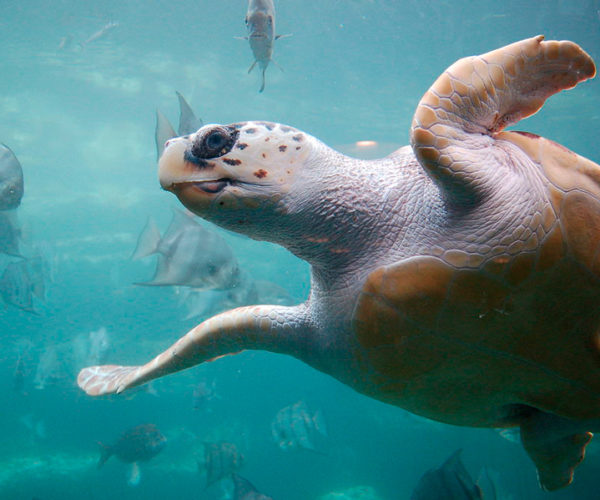 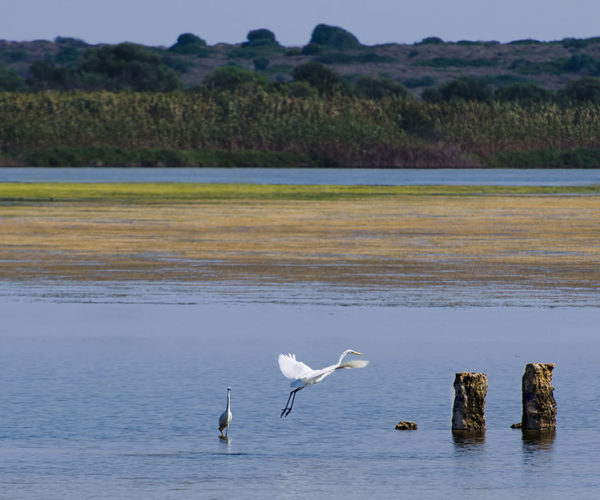 If you are plan on visiting during the migration periods (spring and autumn) make sure to head to the two lakes of the park (i pantani) where flamingoes and other travelling birds take refuge. Viewing hides on each lake offer a great opportunity to get some photos and watch the some bird behaviour, if you are willing to sit quietly for a while.

The History of the Vendicari reserve

A hike round vendicari reserve is a unique experience that leads you through thousands of years of history and unforgettable natural beauty.

Thanks to the network of walkways that criss-cross the 1500 hectare park you can reach nearly every corner of the reserve in a few hours walk.  Late afternoon is the perfect time to set off, it’s cooler and the setting sun set’s a spooky mood for exploring the necropolis.

Tonnara di Vendicari Built originally by the Saracen inhabitants of the reserve in the early medieval period, the Tonnara processed tuna caught close to the coast here for nearly 800 years.

Byzantine Church and Necropolis The south of the Vendicari reserve was the site of an ancient byzantine settlement, of which remains today an incredibly well preserved Trigona (traditional square, domed church) and necropolis.

The Svelta Tower In the centre of the park, close to the Tonnara, is the Svelta tower built in the 15th Century in order to protect the tonnara from sea attacks from pirates. It was in use for over four hundred years, providing military protection to the inhabitants of the area until 1867.

Map of the Park 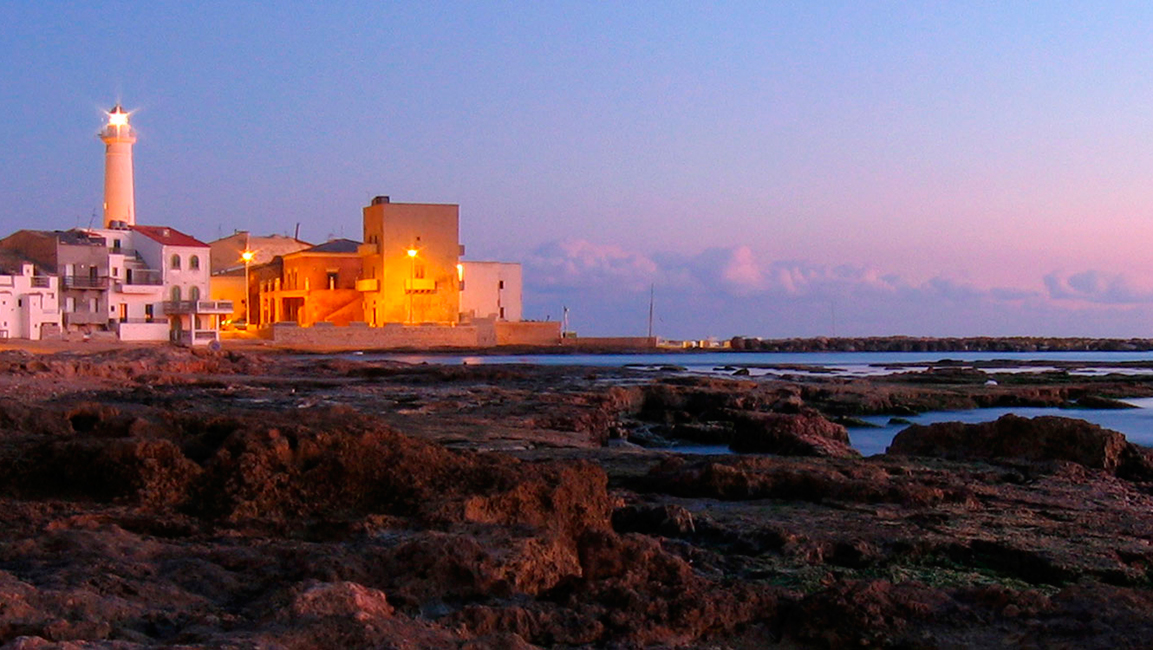